Microsoft has removed the setting allowing users to defer feature updates in Windows 10 2004 but still allows it to be configured via group policies for business versions. Since Windows 10 version 1703, Microsoft has included a setting that allows users to defer the installation of feature updates for up to 365 days. Starting in Windows 10 2004, users have begun to notice that this setting no longer exists in the Windows Update Advanced options screen, and users can now only pause all updates for up to 35 days. As noted by ZDNet, Microsoft updated their ‘What’s new in Windows 10, version 2004 for IT Pros‘ documentation and stated that the setting was removed to avoid confusion.

“Update less: Last year, we changed update installation policies for Windows 10 to only target devices running a feature update version that is nearing end of service. As a result, many devices are only updating once a year. To enable all devices to make the most of this policy change, and to prevent confusion, we have removed deferrals from the Windows Update settings Advanced Options page starting on Windows 10, version 2004. If you wish to continue leveraging deferrals, you can use local Group Policy (Computer Configuration > Administrative Templates > Windows Components > Windows Update > Windows Update for Business > Select when Preview builds and Feature Updates are received or Select when Quality Updates are received).”

Microsoft made this change because feature updates are only forcibly installed in Windows 10 when they are nearing the end of service, and thus the setting is no longer needed. For Windows 10 Pro and other enterprise versions, you can still defer feature updates through Group Policies by launching the Group Policy Editor (gpedit) and go to Computer Configuration > Administrative Templates > Windows Components > Windows Update > Windows Update for Business > Select when Preview builds and Feature Updates are received or Select when Quality Updates are received. 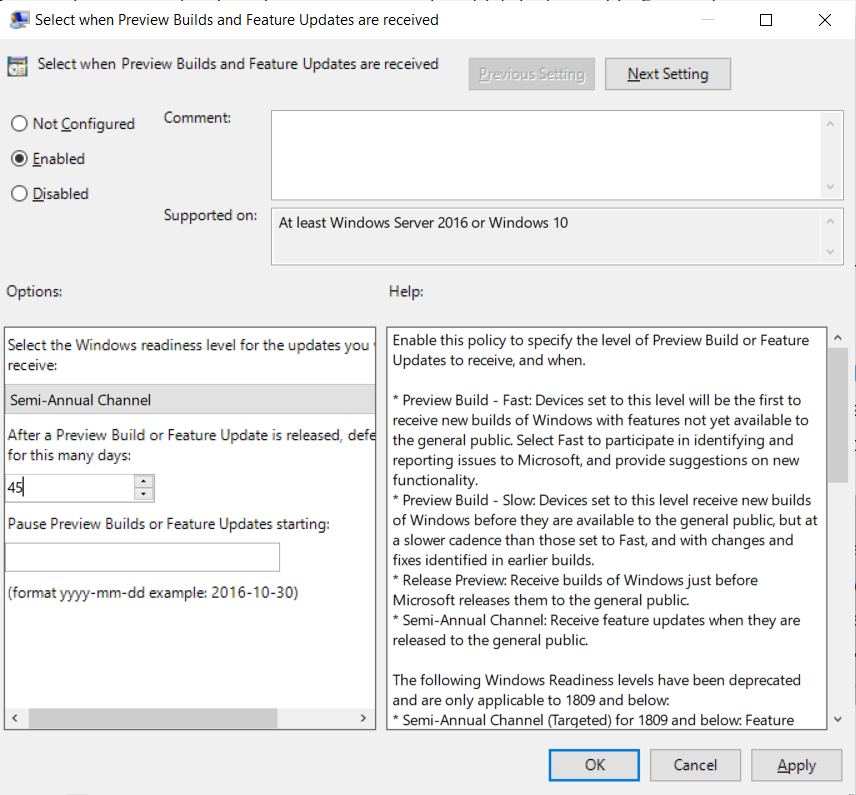 Unfortunately, Windows 10 Home users do not have access to the Group Policy Editor to make these changes. Instead, they can configure the following values under the HKEY_LOCAL_MACHINE\SOFTWARE\Policies\Microsoft\Windows\WindowsUpdate Registry key to defer updates.
Windows Registry Editor Version 5.00 [HKEY_LOCAL_MACHINE\SOFTWARE\Policies\Microsoft\Windows\WindowsUpdate] “DeferFeatureUpdates”=dword:00000001 “BranchReadinessLevel”=dword:00000010 “DeferFeatureUpdatesPeriodInDays”=dword:0000002d “PauseFeatureUpdatesStartTime”=””
When the above registry file is used, it will defer feature updates until 45 days after release. Users who do not want to create this key manually, BleepingComputer has created a registry file you can use.

Once imported into the registry, you can go to HKEY_LOCAL_MACHINE\SOFTWARE\Policies\Microsoft\Windows\WindowsUpdate using the Registry Editor and change the DeferFeatureUpdatesPeriodInDays value to a different number of deferred days.

This setting is no longer needed for most people, as Windows 10 will not force a feature update until your version of the operating will soon be unsupported. By that time, it is probably a good idea to update to be protected from known security threats.