Mozilla has released Firefox 81 today, September 22nd, 2020, to the Stable desktop channel for Windows, macOS, Linux, and Android with new features, bug fixes, changes, and six security fixes. The new features that stand out in this release are the ability to control videos via your headset and keyboard and a new credit card autofill feature. Windows, Mac, and Linux desktop users can upgrade to Firefox 81 by going to Options -> Help -> About Firefox, and the browser will automatically check for the new update and install it when available. 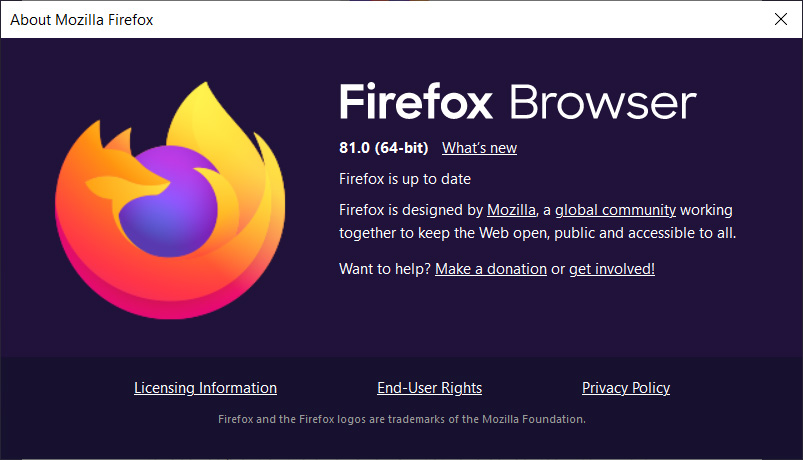 With the release of Firefox 81, all other Firefox development branches have also moved up a version bringing Firefox Beta to version 82, and the Nightly builds to version 83. You can download Firefox 81 from the following links: If the links above haven’t yet been updated to download Firefox 80, you can manually download it from Mozilla’s FTP release directory. Below you can find the major changes and improvements in Firefox 80 — if you want to read the full release notes, you can do so here.

For Firefox users in the US and Canada, Mozilla can now autofill credit card information saved in the browser when shopping online. When released, users can secure the passwords with your operating system login password. This option for Windows will be named “Require Windows authentication to autofill, view, or edit stored credit cards.” The new autofill feature is currently rolling out to users in the United States and Canada and may not be available to all users at this time.

Mozilla has added a new theme to Firefox 81 called AlpenGlow that provides a colorful appearance for the buttons, menus, and windows.

You can enable this theme by going into the Firefox Menu > Addons > Themes and then clicking on Enable under Alpenglow.

Control videos directly from your handset and keyboard

Firefox 81 now allows you to control videos via your headset controls or the keyboard, even if you are not using Firefox at the time or are in another tab. This feature will be particularly useful when listening to a video or music in the background while performing other tasks.